Another show that Kim was working on behind the scenes, Fred Butler's salon show felt very Harajuku-inspired; a combination of the cute colours of pink, green and white, knitwear and the wigs sported by the models felt like a Manga fantasy brought to life. The geometric body armour wouldn't have looked out of place on a Japanese cartoon princess either, while the headpieces were clearly origami inspired. There was a live soundtrack provided by Charli XCX which added a fun spontaneous touch that personally I think should be a more regular feature at Fashion Week.
Images and text by Katie Tillyer
Posted by KIM HOWELLS 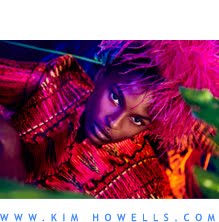